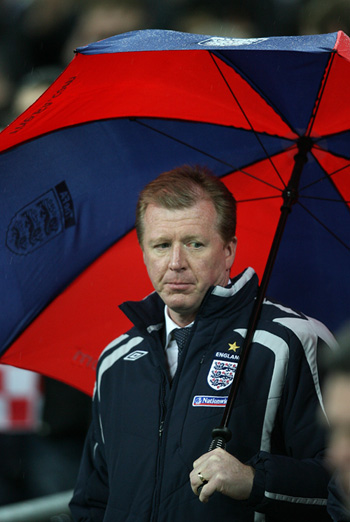 The enduring image of Steve McClaren may be of a bedraggled  man hiding under an umbrella as England’s Euro 2008 dreams crumbled in front of his eyes on a rain-sodden Wembley pitch. However, according to FA bigwig Trevor Brooking, the much-maligned McClaren may well be in the frame for the England manager’s job once again when Fabio Capello’s contract ends after Euro 2012.

Brooking points to the former Middlesbrough manager’s impressive league-winning success with FC Twente in the Netherlands which revitalised McClaren’s career and precipitated a move to the Bundesliga big boys of Wolfsburg in the summer.

“Steve has done fantastic to get a title. PSV and Ajax are usually the sides in Holland who do that and now Wolfsburg are picking up.

Could Steve do the England job again? I am sure if he continues to be a success his name will be in the frame again.”

While the idea of Schuper Schteve getting another bite of the apple he so badly bruised last time around will no doubt be met with a mixture of laughter, bemusement and utter fear on the streets of England, Broooking does make an interesting point about the island mentality which inhibits the English game:

“Sometimes we are a bit lazy with our language. I am watching other coaches and there are people speaking four or five different languages.

We have to encourage our coaches to do that so that they go abroad and get that experience if they can. They have to do it on merit and Steve has done well.”

This valid argument could also be applied to English players as well as coaches, with very few homegrown stars looking past the Premier League and out across the Channel. Although it should be noted that a move to continetal football doesn’t automatically make you an international superstar. Indeed, for every David Platt, Chris Waddle and David Beckham, there is a Matt Derbyshire, Franz Carr and Paul Rideout.