Giorgio Chiellini has denied Giuseppe Rossi’s claims that he was nutmegged during training while on international duty last weekend. 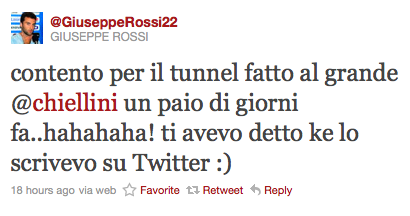 Rossi tweeted that he’d megged Juve’s no-nonsense defender: “I’m happy for the nutmeg I made on the great Chiellini a couple of days ago… hahahaha! I told him that I wouldn’t write about it on Twitter :)”

Chiellini responded, joking to his 49,719 followers: “I can assure you that Giuseppe Rossi didn’t nutmeg me, otherwise he wouldn’t be able to walk anymore.”

Who do you believe?