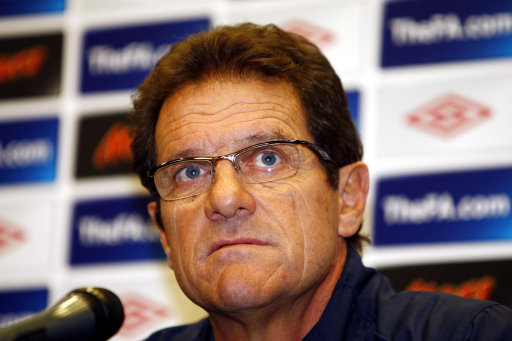 England manager Fabio Capello has confirmed that Andy Carroll, Jordan Henderson and Kieran Gibbswill all start for the Three Lions when they take on France at Wembley tomorrow night.

When pressed about Carroll’s fitness (it was widely thought that the Newcastle target would be robbed of his first full senior cap by an untimely groin tweak) during a pre-game media conference, Capello said:

One burgeoning youngster that will miss out on the festivities is Arsenal starlet Jack Wilshere, who has returned to his club after sustaining an injury in training yesterday.

Capello is also facing an anxious wait over the fitness of defender Phil Jagielka and ‘keeper Joe Hart, who are struggling with a virus and a back problem respectively:

“Wilshere is going home. Jagielka has flu but we think he will be okay. Hart, the doctor is waiting to decide what happened. We think it will not be a big problem for him.”

Capello also added that the three youngsters he intends to put his faith in against Les Bleusshould not be admonished should their performances be less than stellar tomorrow night.

“The three players (Carroll, Henderson and Gibbs), we have to support them if the performances are not okay.”