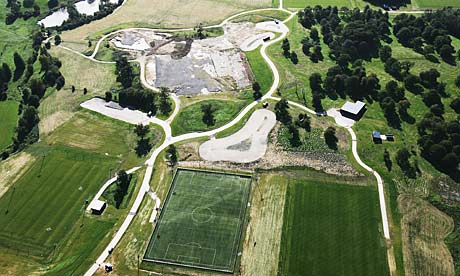 The FA have finally announced that building work on their long-awaited National Football Centre in Burton will begin in January, after the organisation’s board unanimously approved the plans (which were originally submitted nearly nine years ago) yesterday evening.

The FA also agreed to underwrite the project, that is due to be completed in the summer of 2012 (although if it’s anything like their Wembley endeavour, we can probably expect a ‘ground-breaking’ ceremony shortly before the next ice age sets in) , to tune of £105 million.

“It will also be an internationally-leading sports medicine and performance research centre; a training home to enhance international team development and an inspirational hub for everyone involved in football from the grassroots to elite.

“Today’s decision means that we can open in 2012 and help to deliver the first exciting legacy of a golden summer for sport in this country. St George’s Park will be accessible to all, aspirational, educational, sustainable and iconic – a truly national centre for our national game, in the heart of England.”

If St George’s Park has the same effect that Clairefontaine, Coverciano and  the KNVB Academy have had on the French, Italian and Dutch national sides then it really should be a tremendous boon to the increasingly desperate England cause – that said, you can’t help but feel that it’s coming about a decade or so too late.