Can the World Cup holders follow up with a Euro win? 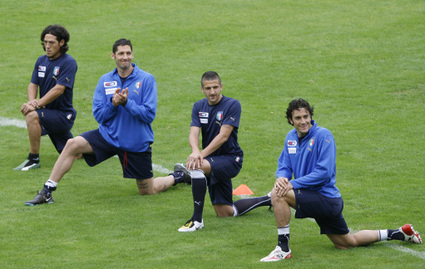 ITALY (Group C)
Group mates Netherlands (9 June, Bern), Romania (13 June, Zurich), France (17 June, Zurich)
Three most valuable players 1) Luca Toni On fire for Bayern this season, and expected to lead the line for Italy at Euro 2008. 2) Gianluigi Buffon Still one of the best, most imposing keepers in the world. 3) Andrea Pirlo Blows hot and cold, but on his day, he can unlock any defence. Few players strike a dead ball better.
Hard fact Italy have the tournament’s oldest squad, with an average age of 29.57

What the media say “To date France are the only side to win a European Championship (in 2000), whilst already holding the World Cup, but Italian optimism is justified. At one point it appeared the Azzurri might struggle to even reach Euro 2008, as Roberto Donadoni began his tenure as manager with a 2-0 friendly defeat to Croatia, then a 1-1 draw at home to Lithuania and a further 3-1 defeat in France in qualifying. Since then, however, they have won nine out of 10 competitive games, finishing top of Group B and only dropping points in a goalless return game against France.” [Guardian Unlimited]
What the bookies say Third favourites behind Germany and Spain. You won’t get much better than 7/1 on them to win the tournament.
Pies predicts The Italian defence looks uncharacteristically shaky (especially without the injured Cannavaro), the midfield is solid but unspectacular, the strike force is inconsistent (apart from Luca Toni). I really can’t see them winning the whole thing; I wouldn’t even be surprised to see them struggle to get out of their group. Third in group
Shit Lookalikes Gennaro Gattuso & Mustafar the dancing midget