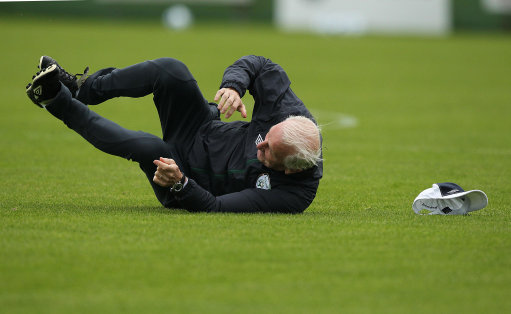 To put it in technical economic terms, Ireland is in a bit of a hole at the moment and the Irish FA (FAI) are far from immune – being, as they are, in the red to the tune of somewhere around €50 million.

In a bid to ease the FAI’s monetary woes, Ireland coach Giovanni Trapattoni has agreed to take a recession busting pay-cut of ‘in excess of 5%’, which is due to come into effect immediately.

Trap’s reduction alone is though to be saving the FAI around €100,000 a year and, as the Italian’s backroom staff have also agreed, the Beeb reckon that roughly €160,000 will be saved in total – with a third of that amount going toward reimbursing businessman Denis O’Brien, who currently shells out for more than half of the management team’s collective salaries.