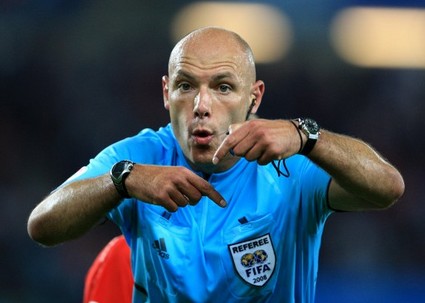 Howard “two watches” Webb has received death threats on the web after his controversial late penalty decision cost Poland a 1-0 win against co-hosts Austria. The Poles have to now beat group leaders Croatia in their final group game, and hope Austria can get something from their game against Germany, to stand a chance of going through to the last eight. In other words, it’s 90% likely that the Poles are out. And it’s all Webb’s fault, apparently.
For example, football blog Soccerlens had to delete and close comments from a profile it ran on Webb, after around 300 comments were posted after the game finished. According to Soccerlens, “The comments were full of hate and vitriol, aiming sexual abuse and death threats towards the English referee and claiming that Webb had taken bribes to give that penalty.”

And a quick trawl on YouTube revealed that there are already several anti-Webb videos up, some of them very disturbing indeed.
I understand that emotions run high when it comes to football, but Webb doesn’t deserve this. He made a 50-50 – some would say brave – decision that has probably put the Poles out (watch it here). If you’ve watched the incident that led to the penalty, you have to say that the Austrian forward’s shirt was tugged – maybe not that hard, but it was tugged. Webb was within his rights to award a penalty, although many refs would not have done so.
I can understand how frustrated Poland’s players, manager and fans must be, but let’s not lose our heads over a game.