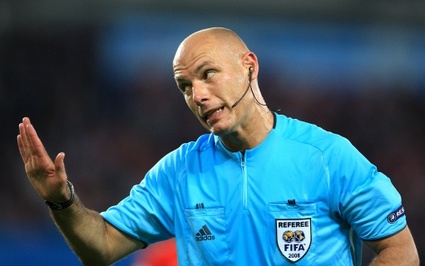 Despite being accused of being a cheat – and far worse – by most of the Polish population, Uefa is standing by Howard Webb. The English ref has been given Spain’s final group game, against Greece. It’s a meaningless game, in as much as Spain are already winners of Group D, and Greece are out, but at least it shows that Webb is not in the sin-bin after his performance in the Austria vs Poland Group B game.
I thought Webb had a fine game. He let play flow where possible, was reluctant to show cards unless absolutely necessary, and followed a Uefa directive to the letter by awarding that late penalty, for shirt pulling, to the co-hosts.

The worst thing I can say about him, is that his gestures sometimes scream “look at me, respect my authority!” but that’s not such a bad trait for a ref.
I hope Webb gets a quarter-final match to ref, but I wouldn’t be surprised if he doesn’t make the cut, partly because Uefa seems to have something against the English, but also to avoid any more controversy – that would be a shame, as I think he’s the best ref England has had for many years, and deserves a shot at reffing the final.
Do you think Webb deserves to progress further than the knockout stages?