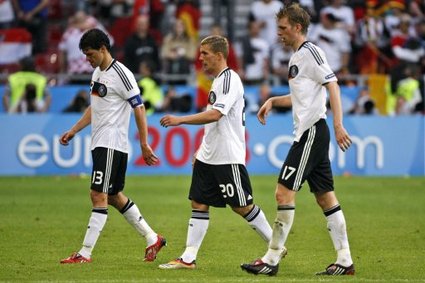 On paper, the Germans will easily get what they need to go through as runners-up to Croatia in Group B – Jogi Low’s men only need to draw with Austria this evening to progress to a quarter-final showdown against Portugal.
In reality, a cup final-style showdown against neighbours Austria – who have shown more pluck than fellow hosts Switzerland – is a major obstacle for a German side that looked distinctly average in their 2-1 loss to Croatia.

Although Germany is a much more likeable football nation than in times past – remember how good it felt when Bulgaria knocked them out of the 1994 World Cup, and when Croatia thrashed them 3-0 at the 1998 World Cup? – there are still many, many fans who would love to see them fail to qualify from their group.
Does that include you? Vote below…