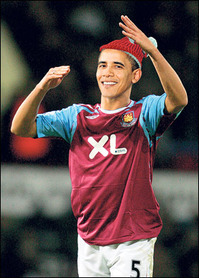 West Ham’s most powerful fan, Barack Obama, is set to accept an invitation to attend the opening ceremony of the 2010 World Cup. The President is a self-proclaimed “soccer” fan -Â he’s publicly backed the States’ bid to host the World Cup in either 2018 or 2022.
“He accepted [the invite],” a proud Sepp Blatter said on Monday. “But you know that heads of state are extremely busy. Hopefully his schedule will allow him to attend.”
Obama and Nelson Mandela together – that’s a photo op that Mr Prez will want to be a part of. So yeah, this will happen, no doubt.