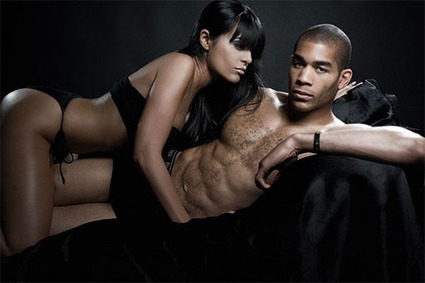 Gooch Onyewu enjoys the spoils after the USA’s amazing win over Spain
A potted match report: USA took their chances, Gooch defended like a Minotaur (when he’s on his game, he’s close to unbeatable) and Spain looked absolutely knackered.
Congrats to the States, who will play either Brazil or hosts South Africa in the final. If you’d have told me after the US’s 3-0 defeat by Brazil that they would end up in the final, I’d have snorted derisively in your face. But fair play to them – Landycakes, Deuce and co. are peaking at the right time, and that’s the key to winning tournaments.

On a level playing field, I’d still take Spain to beat the US 9 times out of 10. But after long domestic campaigns, the Spanish did appear to run out of gas, and very early on in the game. It’s perhaps churlish to point out that many – though not all – of the American players are in the middle of the current MLS season, and as such they had more in the tank than their opponents.
EDITED: OK, the bit about Americans being fresher because they play in MLS is not true, and thanks for pointing it out, but as I said in a comment, Spain’s players have played a lot more football than their US counterparts.
The refs are doing no favours to the States though. Michael Bradley never deserved to be sent off for his challenge on Xavi. That makes three undeserved reds in four games for the US.
Still, I take nothing away from Bob Bradley’s team. They fully deserved the win and I hope they go on to win the Cup. It would be a huge and much-needed boost in the arm for the game over there.
Brazil play SA tomorrow evening. Surely the hosts can’t pull of another shock? You never know…