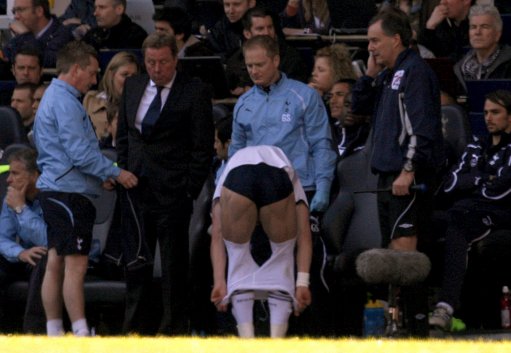 “Gareth, show us your hamstrings!”

Bad news if you’re a fan of Welsh football/Tottenham Hotspur, great news if you just so happen to be Glen Johnson – Gareth Bale has been ruled out of Saturday’s Euro 2012 qualifier with a hamstring injury.

The Welsh FA have confirmed this morning that Bale suffered the strain before hooking up with the Wales squad and that the Tottenham winger did not train with the rest of the boyos on Wednesday:

“Due to a hamstring problem, Gareth Bale has had to withdraw from the Wales squad to face England. He felt tight last week during training with his club.

“After playing 90 minutes on Saturday he felt some muscle tightness. Initially, this was expected to be muscle soreness after playing his first game.

“On joining up with the Welsh squad he was kept off his feet in training for two days to recover. As he still felt tight in the warm-up on Tuesday, Gareth was pulled out of the session.

“He did not train at all on Wednesday and was sent for a scan – the scan revealed that Gareth picked up his injury last week.”

Get it? It’s not their fault.