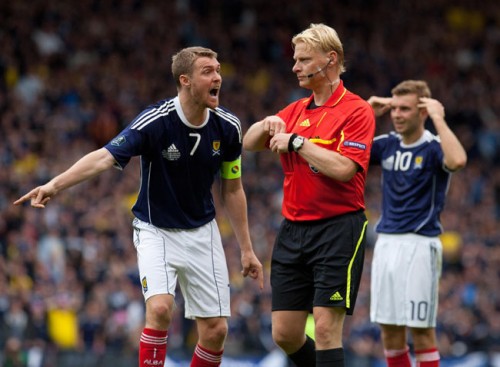 Ronald Koeman lookalike Kevin Blom would be well advised not to book any future holidays in Scotland after the Dutch referee all but ended Scotland’s hopes of making it to the Euro 2012 finals.

With just seconds of injury time remaining and Craig Levein’s men headed for a 2-1 victory courtesy of strikes from Kenny Miller and Darren Fletcher, Jan Rezak’s dodgy dive was deemed worthy of a spot-kick by Blom.  Michal Kadlec converted the spot-kick but the drama wasn’t over yet. Oh no.

After the re-start, the home side went up the other end only to see a legitimate penalty shout, courtesy of the clipping of Christophe Berra’s heels in the Czech box. However, Blom ignored the incident (and the roars of the Hampden crowd), leaving the Tartan army gobsmacked and just a teeny bit angry.