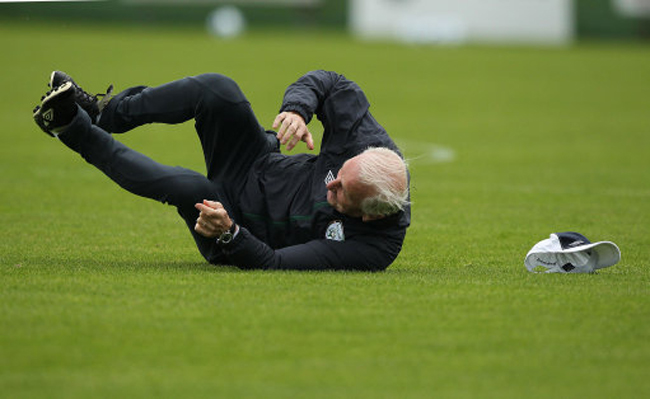 Trap collapses with joy on hearing the play-off draw

I think it’s fair to say that the Irish have been paid back with interest for that infamous Henry handball in the World Cup qualifiers in 2009.

Not only did they find themselves on the good side of a terrible handball-related refereeing decision against Armenia during the week, but now they have drawn Estonia in the play-offs, arguably the weakest of the unseeded teams.

Over in Krakow, the balls of fate have been lovingly cajoled from the bag of destiny and the draw for the Euro 2012 qualification play-offs has been made, with the Republic of Ireland lucking out with what, on paper (and considering the rest of the sides in the pot), looks like the easiest draw of the lot – indeed, the Estonians currently lie in 58th place in the FIFA rankings, 29 positions below Trap’s boys.

Surely the Irish can’t mess it up now? Mercifully, it looks like we’ve managed to dodge a couple of potentially nasty Balkan derbies that could’ve cropped up as well.

Who are you backing to reach the twin holy lands of Polkraine folks? I’ll have a shiny shilling on Turkey, Ireland, the Czechs to make it through, with Bosnia upsetting Portugal over two legs to seal themselves a shock qualification.