Right. Straight off the bat, Pies would like to clarify that we’re not saying this is 100% definitely the design for Arsenal’s new home kit for 2012/13.

Here’s AI’s preliminary mock-up, which is just an altered version of an existing Arsenal strip, which shows that – along with the classic ‘red with white sleeves’ formation – Nike are hell-bent on tagging on a set of gruesome navy blue (they look black/dark grey on the image, but AI claim they’re navy) collars and cuffs… 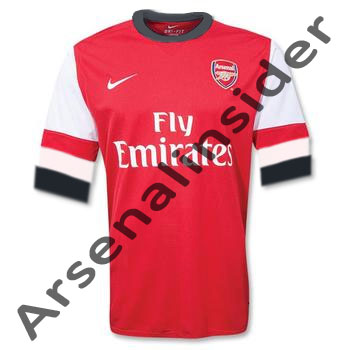 Believe/cast aspersions as you see fit, but one thing’s certain; if this design actually comes to fruition, there’s going to be a lot of jilted Gooners out there. How can you get such an elegant strip so wrong?

Anyone out there a fan? Anyone?