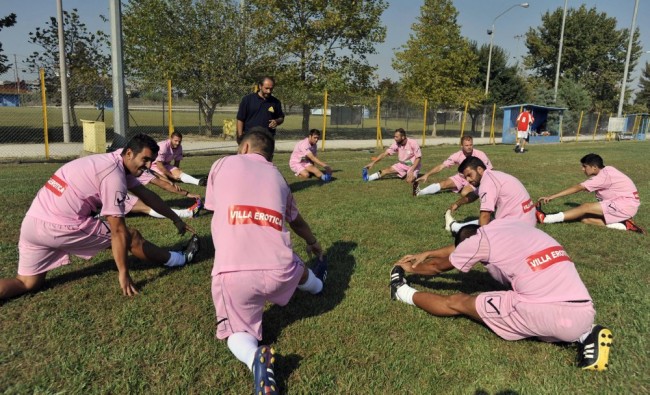 As you may have heard, times are hard in Greece at the moment and the football is definitely suffering as a result, with man clubs facing imminent ruin – even the likes of Panathinaikos way up at the top of the tree being forced into holding what amount to little more than jumble sales in order to sell off their more desirable players.

Voukefalas, a small amateur soccer club based in Larissa, are beating the squeeze in a fairly unusual way – by leaning on the world’s oldest profession and signing a shirt sponsorship deal with not one, but two local brothels:  the Villa Erotica and Soula’s House of History.

“Unfortunately, amateur football has been abandoned by almost everyone,” said Yiannis Batziolas, the club’s chairman, who runs a travel agency and is the team’s backup goalkeeper. “It’s a question of survival.”

Brothel proprietress Soula Alevridou has paid Voukefalas over €1,000 to have her bordello’s logos emblazoned across the club’s shirts, though the league have banned the team from wearing the pink shirts during games – a ban which Alevridou is currently in the process of appealing on the basis that prostitution is legal in Greece.

The club’s newest benefactor turned out for Voukefalas’ first game wearing their new shirts (though only in the warm-up), which they duly lost 1-0, their fourth straight defeat – though a fifth loss on the trot shouldn’t be an issue, as 67-year-old Soula has apparently promised the squad ‘a special time’ if they arrest the slump next week.