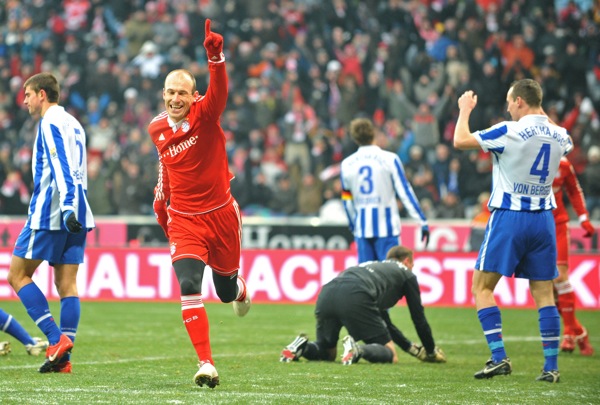 Arjen Robben has been in fine form for Bayern of late, scoring two goals in three games as the Bundesliga re-started after its traditional winter break. The Dutchman has attributed this form to his lucky grey long johns, which help protect his fragile, deerlike legs from the nasty cold weather. “They are not beautiful but they are functional,” he said.

But the bureaucratic schweins up in the big DFB schloss are not happy at the sight of Arjen’s grey legs. Nein! Apparently Robben is breaking ze rules by wearing a piece of kit that differs from the colour of his club’s official kit. Achtung!

“The German federation want a single colour,” Bayern’s sporting director Christian Nerlinger told the club’s website. “We’ll either have to dye them or he’ll have to find another pair.”

A red pair of long johns!? Surely such a thing doesn’t exist.

This is bureaucracy gone maaaaad. Robben might also argue that his pink legs differ in colour to Bayern’s kit.