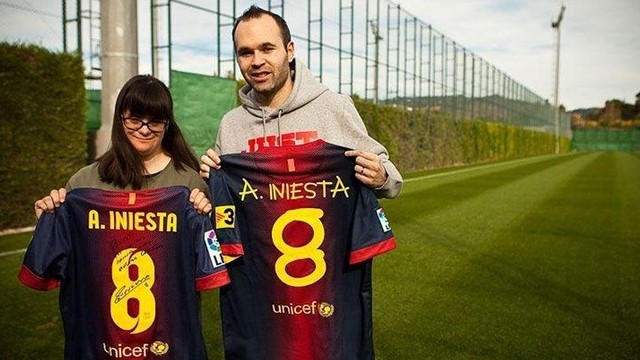 Hardly surprising given they nabbed their best player over the summer, but Barcelona thrashed Santos in the Joan Gamper Trophy at Camp Nou last night, sticking eight unanswered goals past the hapless Brazilians in a match arranged as part of Neymar’s move to Catalonia.

Alexis Sanchez, Pedro, Lionel Messi, an own goal, Adriano, Jean Marie Dongou and a couple from Cesc Fabregas saw Barca utterly trounce Santos on the night, though the real winner is set to be the FCB Foundation and the Fundacio Itinerarium – a Catalan youth charity that aims to help teens with learning difficulties get into sport.

Allow us to explain.

You see, the names and the numbers printed on the back of Barca’s shirts for the match were rendered in a font designed by Anna Vives, who you see up there holding her creation aloft with Andres Iniesta. Anna has Down Syndrome and works locally as a graphic designer, and she contacted the club withe the offer of designing the lettering and numbering on a one-off basis with the idea that all the match-worn shirts were then flogged on Ebay to raise money for charity…which is exactly what is now happening.

While we’re on the subject, here’s the highlights from Barca’s disembowelling of Santos…