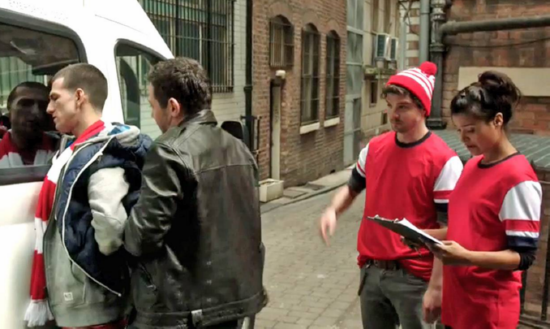 Arsenal Football Club banned BBC police drama “By All Means” from using the club’s official kit after taking umbrage with the show for portraying their fans as half-witted, inept criminals.

The programme, which aired on Sunday night, featured a scene wherein a bail-skipping Arsenal fan was tricked into being re-arrested after being invited for a tour of the Emirates by undercover police.

The Indy describe the scene in question…

“He arrives at an office covered in stickers saying “Arsenal” and “Emirates”. He meets two undercover detectives, who are decked head-to-toe in the north London club’s famous red-and-white colours, like the suspect.

“The suspect heads to the bus for his dream trip but is instead arrested by Brown’s Jack Quinn and told “You are under arrest for being an Arsenal fan…anything you do say will be ignored.”

“When Quinn is asked if the scam was ethical, he says they’re aren’t just crooks: “It’s worse than that, they’re Gooners.””

However, Arsenal suffered a massive sense of humour hemorrhage and banned the series’ producers, Red Planet Pictures, from using any official merchandise or branding, which left the actors being clad in the generic, logo-less knock-offs you see above.

A spokesman for Red Planet Pictures said: “Arsenal FC declined permission to use their branded shirts within the context of the script so production decided, on advice, to use shirts in a similar style instead.”

A spokesman for Tottenham Hotspur (i.e, a Spurs fan on Twitter) branded the arrest scene “priceless”.