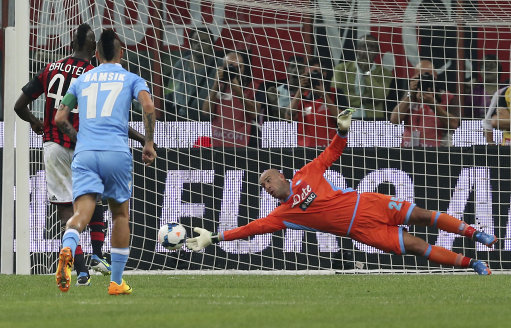 A fortnight or so ago on-loan Napoli ‘keeper Pepe Reina became the first ever goalie to save a Mario Balotelli penalty when he got a strong right hand to the Milan striker’s spot-kick when the two sides met at the San Siro.

Given that he’d just made a little bit of history, Reina felt compelled to ask Balotelli for his shirt after the game and Balotelli duly obliged – though if he knew what Reina had in mind then we imagine he may well have been a little more reluctant to hand it over.

Indeed, Reina has admitted that he now sleeps wearing Balotelli’s shirt having fashioned it into a slightly creepy pair of pyjamas, telling Italian reporters:

“After saving Mario’s penalty I couldn’t not ask for his shirt. It was a historic event. He gave me it and I’ve brought it home to create an unusual pair of pyjamas. I sleep with his shirt and Napoli shorts.”

O…kay. Nothing weird about that, nothing at all. Just, just please tell us you washed it first.