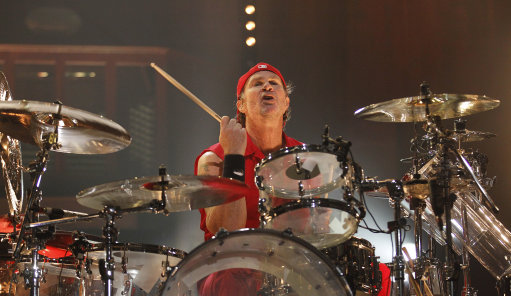 With the Red Hot Chili Peppers in town for a concert, drummer Chad Smith made a heinous tactical error during a pre-gig drum clinic at the Hard Rock Cafe in Belo Horizonte that resulted in the Will Ferrell-a-like receiving scores of death threats from jilted Flamengo fans.

His crime? Well, during said drum clinic, Smith was gifted a Flamengo shirt from a fan in the crowd. After the shirt was held aloft to a mixed reaction from the baying audience, Smith then stuffed the jersey down the back of his jeans before removing it and casually discarding it.

‘Twas obviously nothing more than light-hearted ribbing, but still this lead many fans to take to Twitter to lay into Smith, with many crossing the line and threatening to do the RHCP man serious physical discourtesies and worse – with several fans promising to maim Smith when he turned up in Rio (where Flamengo are based).

He then duly apologised for his actions…

I want to apologize for my inappropriate antics at the drum clinic,my joke about team rivalries went too far. Flamenco fans…I’m sorry.

In a bid to further placate the irate masses, Smith then wore the Flamengo shirt while signing autographs for fans after turning up in Rio for the Peppers’ gig…