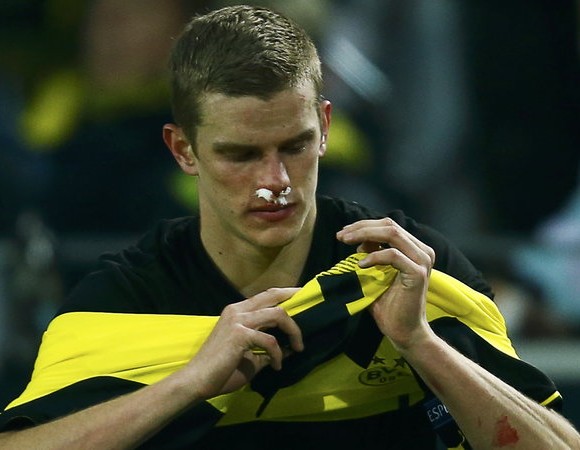 As can clearly be seen, Borussia Dortmund’s Sven Bender took a nasty blow to the face against Napoli in the Champions League last night, breaking his nose and releasing an unstoppable tsunami of blood.

Even though Bender, who was playing as a makeshift central defender due to Dortmund’s current injury crisis, had his nostrils plugged several times over the course of the evening. However, the blood wouldn’t stop flowing and the cotton wool buds being shoved up his nose provided little resistance as the midfielder’s vital fluids continued to leak.

As players are prohibited from playing with blood on their kit on safety grounds, Bender was continually forced to change his jersey as the claret continued to drip.

Indeed, after writing off his original match shirt, Bender managed to bleed all over both of his back-up shirts as well – which left the Dortmund kitman in a bit of a pickle as there were no more spare jerseys to give to Bender.

With no chance of him being subbed off due to the paucity of defensive options, Dortmund’s kitman was forced to run round to the club shop at the Westfalenstadion and acquire a replica, which he duly hurried back to the dugout to give to Bender.

Jurgen Klopp then confirmed the kerfuffle while speaking to reporters at his post-match press conference (quotes via Reuters):

“It was important that [Bender] stayed on because of his performance. It was a great game for him and we had to change his bloodied shirt several times. The last one we got from the club shop.”

May we suggest someone buys a Mastic gun for the physio bag before the next game? A quick shot of industrial expanding gum resin up the nostrils is sure to plug any leak.