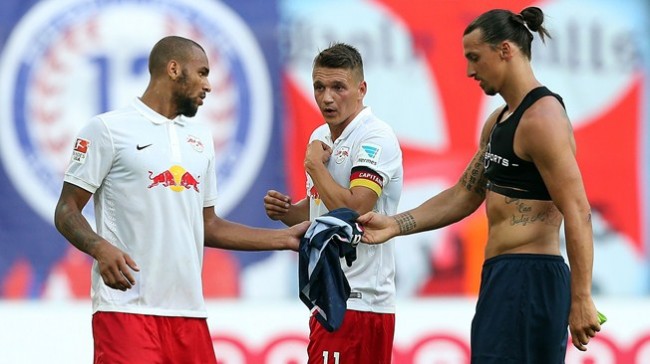 With the club just five years old after being formed on the back of some serious investment from Red Bull back in 2009, RB Leipzig are used to playing the likes of SV Wacker Burghausen, Preußen Münster and both Borussia Dortmund and VfB Stuttgart’s second strings in the German third tier so when PSG and Zlatan rolled in to town for a friendly on Monday evening, it was understandably a big deal for the Leipzig players.

Predictably, there was a rush to swap shirts with PSG’s main man after the Swedish collosus was substituted in the second half, with Leipzig captain Daniel Frahn and new signing Terrence Boyd getting in a bit of a flap over who had the right to claim Zlatan’s jersey.

We’ll let the report from FIFA.com take up the story:

When Ibra was subbed during PSG’s 4-2 defeat, opposite captain Daniel Frahn rushed over to get his No10 jersey, only to have his request politely denied by the 32-year-old.

“Sorry, but I have promised it to this young man,” said Ibrahimovic as he handed the shirt to Frahn’s new strike partner Terrence Boyd (as seen in the above picture).

Frahn did not react to kindly to being usurped by his junior partner in such a manner, snapping after the game that Boyd had been “disrespectful” only for Boyd to then apologise to his skipper in the dressing room for his disobedience.

Thankfully, Zlatan was on hand to mediate before the squabble got out of hand.

Fortunately for all involved, as Boyd was apologizing, in walked Ibrahimovic – with another of his jerseys for Frahn.

“I had a second, dry jersey with me,” said the Malmo native. “The captain can have this one.”