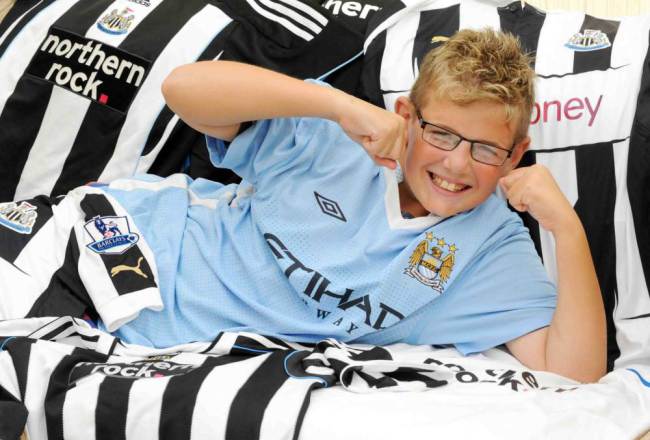 Edward Mellor: a turncoat in the eyes of the footballing gods

A young football fan has bunged his large collection of Newcastle United replica kit on Ebay because he’s fed up of the Toon treading mid-table water and, as such, has changed his club allegiance ahead of the new season.

Edward Mellor from Prestatyn in North Wales, decided that on the eve of his 13th birthday he would become a Manchester City fan.

His mum, Katie Mellor, was then tasked with flogging Edward’s wardrobe full of Newcastle kit on Ebay:  a job lot of 20 shirts, five pairs of shorts and two pairs of socks.

The Ebay listing even reads: “Genuine reason for sale as my son now supports Manchester City!”

Apparently young Edward has changed teams as he wishes to go to games with his dad and older brother both of whom are City fans, with mum Kate explaining to the Chronicle:

“They support Man City, whose ground is much easier to get to from here.

“To get to Newcastle it’s about five hours by train and you have to change numerous times, whereas it’s a direct route to Manchester from here.”

Edward himself then added:

“It’s been fun supporting [Newcastle] but also a bit frustrating.

“I’m not changing because City are more successful.

“I just want to go to games with my dad and brother and support the same team.”

Pressed about his divided loyalties before Newcastle and Man City met on the opening weekend of the Premier League season, Edward replied: “No. I want City to win as I’m a City fan now.” 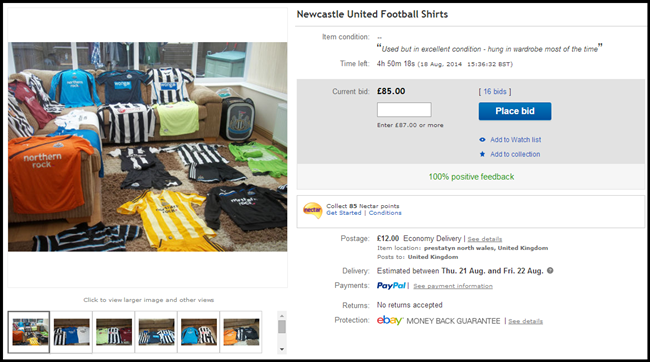