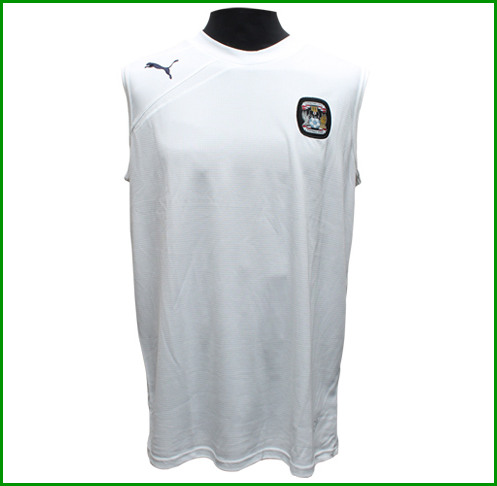 As if they haven’t had enough flak to deal with over the past few years, Coventry City fans have once again been reduced to a state of “W in T ever-loving F?” by their club after the Sky Blues’ were caught selling re-hashed Leicester City knock-offs in their official store.

One fan posted a photo of the offending shirt (a 2013/14 training vest, as far as we can tell) on Twitter which, despite having a Coventry badge stitched on the chest, also features a faint outline of Leicester’s “King Power” sponsor logo…

Cov are selling this top for £15 look closely can u see king power they are ex Leicester tops @Coventry_City explain? pic.twitter.com/i14jQzSCVH

“The club is a laughing stock,” one furious fan told the Coventry Telegraph.

Fear not though y’all, as Coventry themselves were duly made aware of the shoddy merchandise they were flogging through their store and the club were at pains to point out and that it’s just a one-off production malfunction…

@jockdmj @CJ_covblaze Of course not! Appears to be an isolated production factory defect which we will be raising with them tomorrow #pusb

Sadly, this kind of administrative incompetence is becoming synonymous with Coventry these days.