First they said we’d never see a sponsor splashed across the front of it, now it looks like Barcelona are ready to ditch their famous vertical blaugrana stripes in favour of a new horizontal design for next season.

Barca’s kit has featured vertical stripes or a variation thereof for their entire 115-year history, but it seems that 2014/15 will be the season where it all goes arse-over-nape.

According to Catalan newspaper Sport, who are quoting an inside source at the club, next season’s Barca kit is going to look something like this… 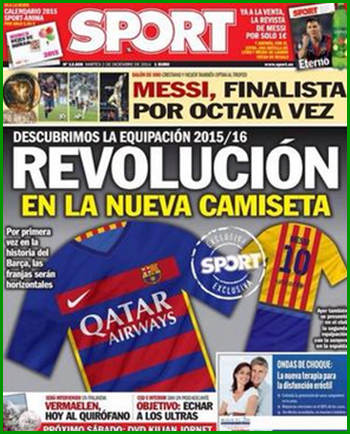 Apparently the new design has already been green-lighted by president Josep Maria Bartomeu having been presented by Nike at a secret ceremony at the Camp Nou on Monday.

“The company that equips Barcelona (Nike) needed an innovative design because sales are down when the design is very similar to the previous year.”

Truly, nothing is sacred any more.