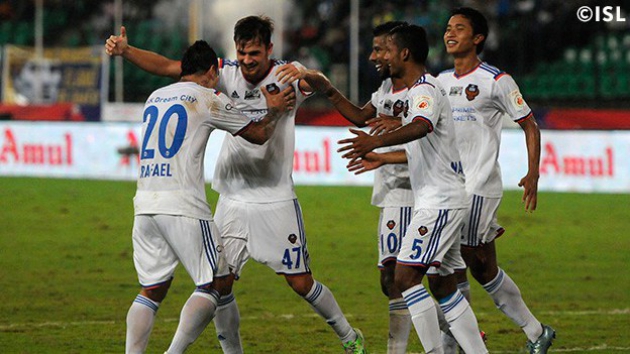 Last night’s Indian Super League clash between FC Goa and Chennaiyin was held up for several minutes when the referee ordered a player to change his underwear.

However, rather than any kind of sanitary issue, it would appear that the official was unhappy with the colour of pants the Goa was wearing underneath his shorts.

The Goan players were bemused with quite a few of them showing the referee the colours of their own underwear.

It was rather surreal to see the Goa manager Zico gesticulating with the fourth official about this matter. Play was stopped for almost two to three minutes.

When the player finally went to the sidelines to change his underwear, Goa played with ten men then.

One is not sure if checking the colours of the underwear of the players falls into the purview of the officials; if so whether it should be becomes another topic of interest.

Perhaps the powers to be can exhibit more flexibility regarding such affairs.

After the unnamed player finally changed into a more suitable pair of grundies at the ref’s behest, Goa went on to win the game 2-0 and go top of the ISL table as a result.

They’ll be changing their pants every week from now.