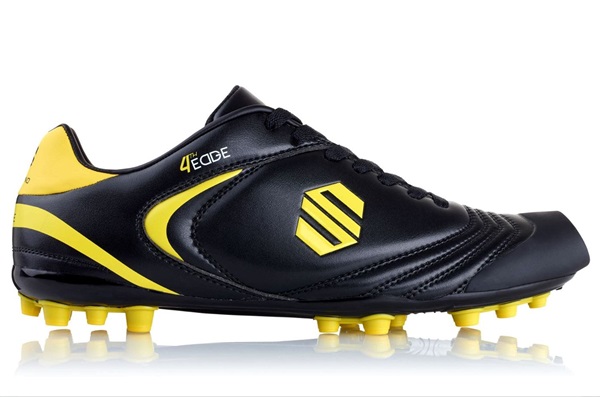 What you’re looking at here folks, is the future of the football boot…apparently.

Admittedly, we had to check it wasn’t April 1st, but these are a new concept football boot concocted by sportswear firm Boot Technology, who reckon their revolutionary toe shape is set to change the very face of football itself.

As you can see, the Serafino 4th EDGE boot has a flattened, square toe, which supposedly gives players more metatarsal protection and increases surface area when shooting with the toe.

According to The Sun, Boot Technology have invested £500,000 into developing the idea and are aiming to raise at least £100,000 through crowd-funding site Kickstarter when their appeal goes live this week. If all goes to plan, they hope to have the boots in shops before Christmas.

Weirdly, Harry Redknapp and Alan Curbishley are both on board, with the former singing the 4th EDGE’s praises as its harder toe “gives players an extra dimension” when shooting under pressure…

“The first thing I noticed was how comfortable the boot was,” Curbishley added.

“I’m intrigued to see how the ball moves when toe punted. Looking forward to see if the toe bit has any effect on the comfort off the boot when running.”

This has got to be bollocks, right? By the look of that horrendously blocky toe, you’d be better off playing in clogs!