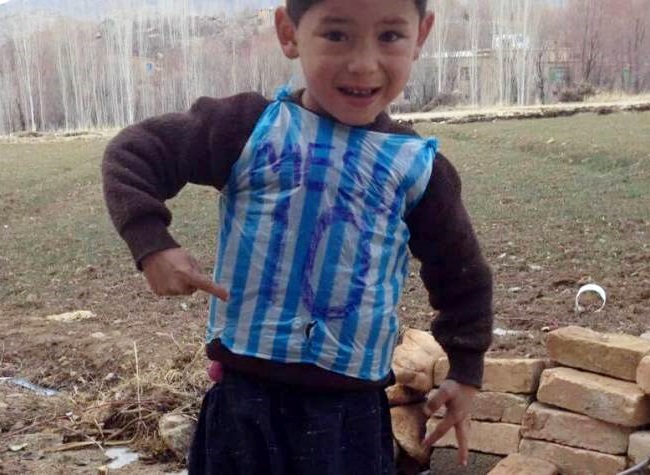 The young tyke you see afore ye is none other than five-year-old Murtaza Ahmadi, who is soon to meet Lionel Messi after a worldwide search was launched to track the youngster down last week.

Indeed, Murtaza unwittingly became the centre of a huge internet campaign when a photo of him wearing a home-made Messi shirt – crafted lovingly from a blue and white-striped plastic bag – started doing to rounds of social media.

The hunt was then on to track Murtaza down, with Messi’s own PR team assisting in the effort to get in contact. After a few false leads and hoax sightings, it was eventually ascertained that the youngster hailed from the remote Ghanzi region of southern Afghanistan.

Now, rather brilliantly, it’s been confirmed that Messi has been in touch and is currently in the process of setting a date to fly in and meet his most famous little fan.

“We have been in contact with Leo Messi and Barcelona to arrange a meeting,” announced Afghan FA spokesman Syed Ali Kazemi.

Lovely, just lovely. When the internet is used as a force for good, it’s a most definitely a beautiful thing.