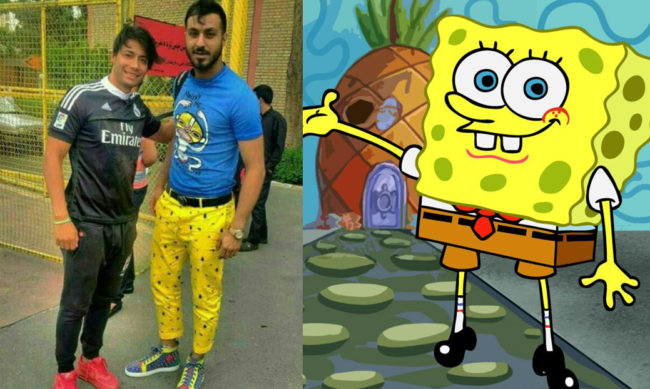 A former Iran international goalkeeper has been banned for six months for an “inappropriate conduct” breach that amounts to wearing a pair of gaudy trousers that looked a bit like Spongebob Squarepants.

Ex-Persepolis ‘keeper Sosha Makani, 29, has been suspended by the Iranian football federation (FFIRI) after a photo of his yellow pantaloons was posted on social media last month.

According to the Associated Press, Makani’s horrendous ‘Spongebob’ trousers fell foul of Iran’s strict clothing laws and therefore the FFIRI’s morality committee decided the sartorial crime was worthy of a hefty suspension.

This isn’t the first time Makani has fallen foul of the morality committee in recent months either, having been arrested and briefly imprisoned back in January after (largely innocuous) photos leaked online of the goalkeeper frolicking in the presence of women unrelated to him – another no-no as per Iran’s hard-line stance on such matters.

For the record, the ruling on Makani’s ban is not final and can be appealed, but some form of humbling penance for wearing those god-awful trousers in the first place would certainly be Pies’ recommendation.