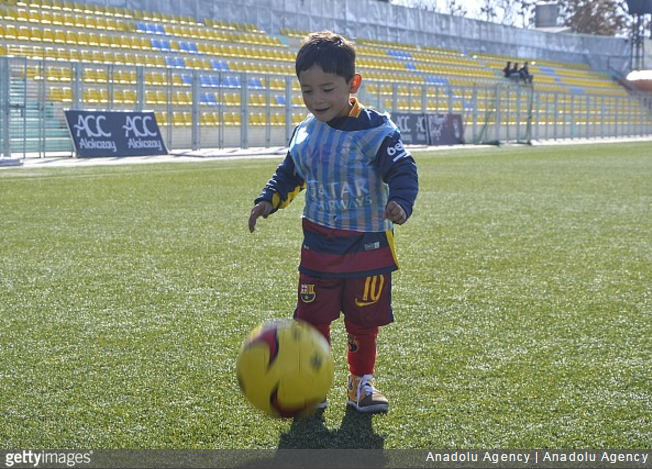 While the name might not be instantly familiar, there’s a good chance you know full well who Murtaza Ahmadi is.

He’s the five-year-old kid from a remote village in southern Afghanistan who became the subject of a worldwide social media hunt back in February when a photo of him dressed in a shopping bag with Lionel Messi’s name daubed on the back went viral.

Murtaza was eventually tracked down and subsequently enjoyed a few of the perks that come with being a celebrity, with the Afghan Football Federation inviting him to their training headquarters in Kabul for a kick-about.

Murtaza then received a dispatch from Messi himself, who sent the youngster a gift package containing a football and a personalised jersey signed by the Barcelona star to replace his DIY version.

Now, several months on down the line, Murtaza (who has since turned six!) has finally come face to face with his footballing idol, with Messi flying out to meet his biggest little fan…

The pair actually met in Doha, with Barcelona touching down in Qatar to play a friendly against Al Ahli on Tuesday night.

The image the world wanted to see. The six-year-old boy who dreamed of meeting his hero, Messi, finally comes true.

They also confirmed that Murtaza will escort Messi out onto the pitch before the Al Ahli match.

Don’t it just warm your cockles on this shrill winter’s afternoon?