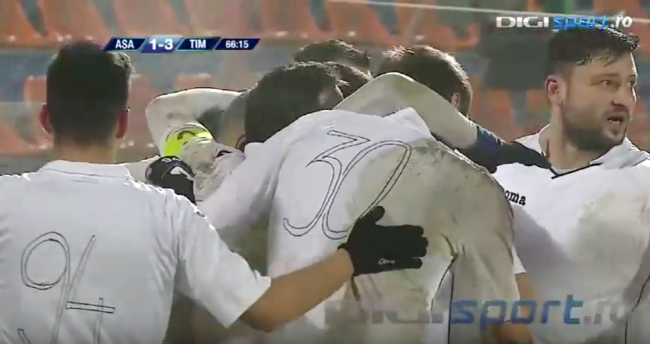 While we’re positively certain that the Romanian Cupa Ligii usually runs like atomic clockwork, Wednesday evening’s semi-final between ASA Targu Mures and ACS Poli Timisoara came perilously close to erring on the side of farce.

First of all, a frozen pitch forced both teams to play in trainers. Secondly, and altogether more laughably, the away side forgot to bring a change of strip with them.

Indeed, after realising that their first-choice purple kit would clash with Targu Mures’ red and blue-striped ensemble, Poli Timisoara were forced to hurriedly commandeer a set of plain white strips to play in.

Allied to that, the visitors had to use black marker pens to scribble their squad numbers on the back of the blank shirts in order to satisfy FIFA regulations…

Funnily enough, the pre-match furore over their clobber didn’t seem to upset Poli Timisoara, who ended up securing a 4-2 lead to take with them into next week’s second leg at their place.

Wonder if they’ll be sticking with their lucky ‘third’ kit for the occasion?