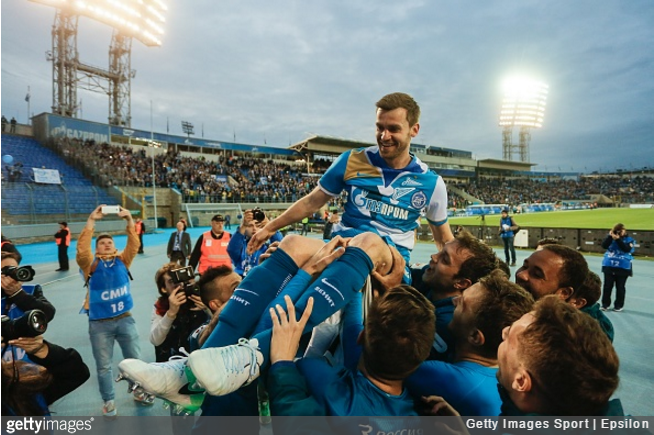 Having first joined the club way back in 2007, Nicolas Lombaerts is all set to up sticks and leave Zenit St Petersburg this summer to return to his native Belgium.

Indeed, the 32-year-old defender has agreed a three-year deal with KV Oostende, which will begin when his current Zenit contract dwindles to nowt in a few weeks’ time.

And so, to thank Lombaerts for his 10 years of loyal service, Zenit turned their final home league tie of the season against Krasnodar on Wednesday evening into a great big farewell party for the departing centre-back.

Before kick-off, the fans inside the Stadion Krestovskyi laid on a massive choreo, unfurling a huge banner of Lombaerts that read “You Are Zenit”…

Lombaerts was also given a standing ovation when he came on in the 90th minute, before being handed a large bunch of flowers after the final whistle as he made his way around the stadium on a victory lap.

Zenit also presented the Belgian stalwart with a rather nifty custom shirt, which was made up of all 10 jerseys he’s sported for the club over the course of the last decade, all spliced together like a polyester scrapbook…

Nico Lombaerts was given a custom-made Zenit shirt at the end of the game, made of the kits he’s worn over the last 10 years #ThankYouNico pic.twitter.com/cfPfT41Y5W

If Zenit aren’t planning on putting those things on sale, they really should.

Pies would happily take one of their hands for starters.