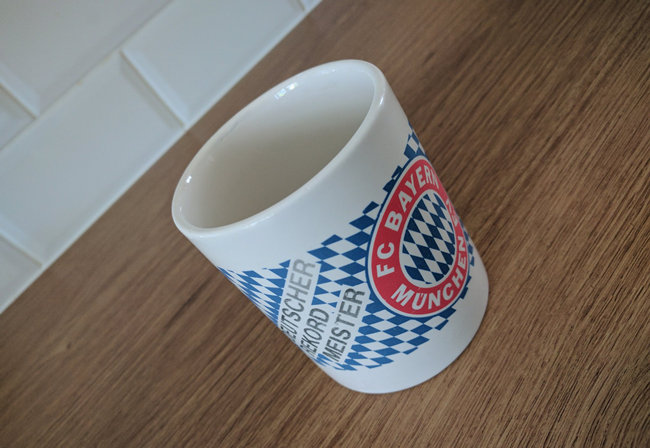 After over two decades of loyal service, English football fan Jim Entwhistle was finally forced to retire his beloved Bayern Munich mug recently after finally accepting that the old gal just wasn’t up to snuff anymore.

A week or so ago, Jim – a Nottingham Forest fan by trade – took to social media to broadcast the bad news, tweeting: “After 20+ years of service, 1000s of brews, I’m retiring the Bayern mug. Like it’s owner, it’s become faded and cracked.”

However, after tagging Bayern in the tweet, the Bavarian club took heed of Jim’s plight and duly contacted him directly to offer a like-for-like replacement.

Sorry to hear that, Jim. It’s impossible to replace such a precious item, but if you DM us your address we’ll send you a new mug. #MiaSanTea pic.twitter.com/f8FpqrTcN3

Sure enough, a brand new Bayern mug arrived in the post a few days later, meaning that Jim could go on sipping his char from a vessel emblazoned with his Bundesliga team of choice.

We hope your baby son looks after this one as well as you did yours, @jim_entwistle! ☕️ #MiaSanTea

Speaking to BBC News, Entwhistle revealed that he received his first mug back in 1996 as a gift from his uncle, who lives in Germany, after Bayern hammered Forest in the UEFA Cup.

I think he thought he was being funny, but over the years the mug and I became quite attached.

It followed me around the country, through uni and work. Others have come and gone but it’s always been there.

Hear hear brother. Any tea-swilling Englishman worth his salt could surely sympathise.