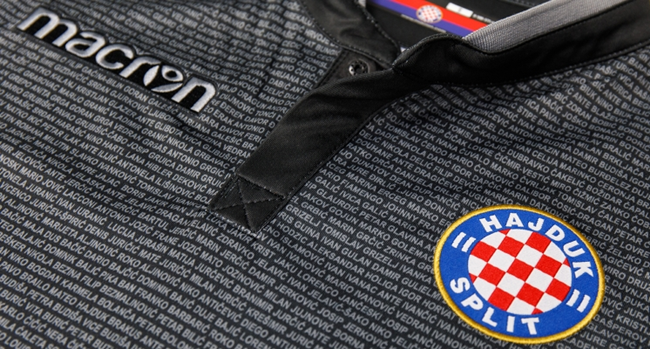 After introducing both Braille and Morse code to Sporting Lisbon’s new strips, Macron have done it again in terms of subtly incorporating clever little design flourishes into their kit design.

The latest recipients are Croatian side Hajduk Split, whose new jersey is the grand culmination of a long-running fan project.

Last year, Hajduk and Macron launched the ‘Ili Jesmo Ili Nismo’ (‘Are We Or Are We Not’) campaign which offered supporters the chance to have their name included on the club’s new strip if they paid 1911 kuna (in reference to the year Hajduk were formed) to become a club member – that’s roughly £230.

Thousands of supporters did just that, and now their names are plastered all over the new 2017-18 third shirt…

We’re reliably informed that the woman in the video is Hajduk fan Alma Saric, who won a competition to be the first supporter to lay eyes on the new kit, weeks before it goes on sale.

As for Macron, it’s nice to see a kit supplier putting a little bit of thought into their latest offerings **cough Nike cough same template for everybody cough cough**.