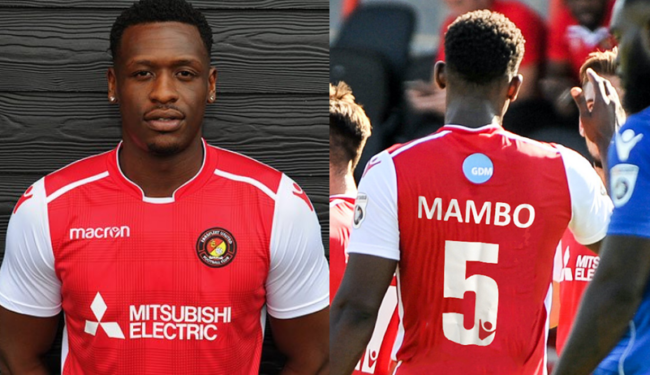 As you may recall, Ebbsfleet United are currently in the process of auctioning off a replica shirt in the name of charity after it became the subject of a recent viral frenzy.

The National League side made headlines when it was noticed that central defender Yado Mambo hadn’t been bequeathed with the squad number his surname so richly warranted: the No.5 shirt.

After finally bowing to public pressure, Ebbsfleet proudly announced that they had produced a special one-off ‘Mambo No.5’ jersey and promptly slapped it on Ebay, adding that all proceeds from the sale would be donated to Prostate Cancer UK.

However, Ebbsfleet have now revealed that they have an ace up their card which they hope will be enough to push the final price into the stratosphere…

LOU BEGA IN THE HOUSE! | This story just won’t go away… the actual Lou Bega has been in touch and he’s agreed to sign the winning #MamboNo5 shirt for whoever bids the most at this link: https://t.co/nHul2eotnj. Please do keep on bidding for @ProstateUK pic.twitter.com/E5gqpVlIgq

The club added the following update to the foot of the shirt’s Ebay listing page:

Since the original listing, Lou Bega – the artist who scored an international smash hit with Mambo No.5 – has also agreed to sign the winning shirt!

What a coup! Now they just need to secure the signatures of Angela, Pamela, Monica, Erica, Rita, Tina, Sandra, Mary and Jessica to seal the deal.