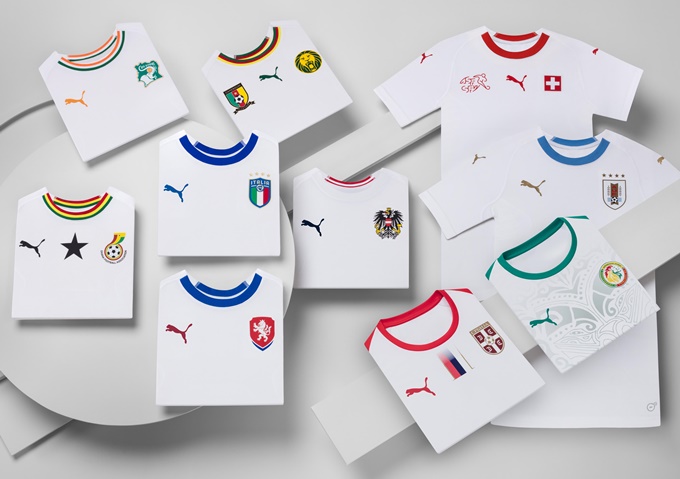 Puma have released a job lot of new kits that the requisite nations will be wearing during the upcoming international break and (for some of them at least) on until the 2018 World Cup.

The batch contains 10 new away strips for the likes of Italy, Austria, Czech Republic, Ivory Coast, Ghana and Cameroon, as well as the Russia-bound teams like Serbia, Switzerland, Senegal and Uruguay.

As you can see, Puma have put as little thought and effort into the designs as humanly possibly, cranking out near-identical, all-white designs for each shirt.

The most galling aspect, however, is that they’ve also had the gall to claim the kits “represent each nation individually”.

To be fair, Serbia’s does have a stripe.

Call us curmudgeons if you must, but surely a better, more concise way to celebrate each country individually would be to create 10 bespoke designs rather than fobbing them all off with cookie-cutter templates?

Other than a handful of nice retro-tinged Adidas offerings, mainstream football kit design really is in the gutter at the moment.

The sooner companies like Nike and Puma ditch this monotonous ‘silo’ approach and start knocking out the good stuff again, the better.