An Icelandic artist has been told to cease and desist selling a particular t-shirt after the Patent Office in Reykjavik decided that his homage to the ‘Viking clap’ was deemed to infringe on an existing copyright.

As you no doubt recall, the Viking clap (or ‘Thunder clap’ if you’d prefer) came to the fore at Euro 2016, where the Iceland team made it there own as they defied expectation to make it through to the quarter-finals.

Scholars of the clap (ahem), may also know that it was indeed a Scottish invention having originally been deployed by Motherwell fans against Icelandic Europa League opposition back in the 2014.

Anyway, in a Facebook post entitled ‘How The Grinch Stole The Viking Clap‘, artist Hugleiker Dagsson revealed that he is being pressured into stopping the sale of his popular ‘Hú’ shirts as the word ‘Húh’ is apparently already owned under trademark in Iceland. 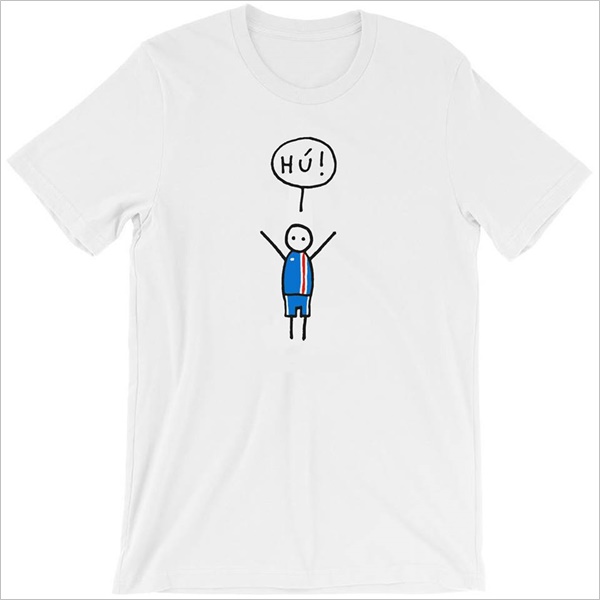 The Patent Office have ruled that ‘Hú’ and ‘Húh’ are actually the same word and therefore Dagsson must either stop printing his shirts or pay royalties to the copyright holder.

Writing on Facebook, Dagsson has contested the decision, claiming that ‘Húh’ isn’t actually grammatically correct in Icelandic and that the chant itself was stolen from Scottish football fans in the first place.

Everyone agrees. [The shirt] sold well. But on this day we received a message from an unnamed person (let’s call him Grinch) who told us he should be “HÚH!” and only he could print it on shirts. This surprised us.

First, we did not know that this unrealistic [legal] move could be used. We thought everyone should have access to this sound/word/shout.

Secondly, I thought we had plundered the clap from Scotland like real Vikings.

Third, it’s not spelled HÚH in my mind. In my opinion, the Icelandic spelling cannot be HÚH because we do not end a word with ‘H’ in our country.

Dagsson also added that he still has t-shirts for sale should fans wish to purchase one before the Patent Office “tape the window shut”, with half the proceeds of all sales being donated directly to the Icelandic Cancer Society.