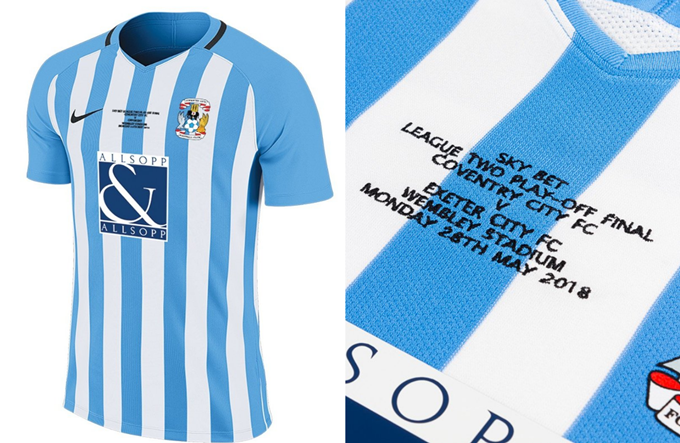 Coventry City have announced that they will be wearing a special ‘one-off’ kit in the League Two Play-Off final, where they’ll face Exeter City at Wembley next Monday night.

The Sky Blues claim that they’ve been forced into producing a bespoke outfit for the occasion because supplies of their standard all-blue 2017/18 home strip have been “exhausted”.

Of course, despite their stock issues, Coventry have been good enough to make sure replicas of the new one-use striped shirt will go on sale via the club’s official website.

Coventry’s chief executive Dave Boddy was the man entrusted with breaking the news:

With our existing supply exhausted, we have commissioned a special, limited edition one-off shirt for the Play-Off Final.

The [new] striped kit is one with much history, especially at Wembley, for the Sky Blues.

We hope it will be very popular with supporters, who will be able to buy the shirt now online.

This will not be the kit for the 2018/19 season, so we hope it will be a very unique shirt for the club and fans.

Do you think we were born yesterday, David?

Well if that ain’t the most blatant cash grab since… well, since Coventry City attempted to sell us their own club-branded bottles of windscreen washer fluid… 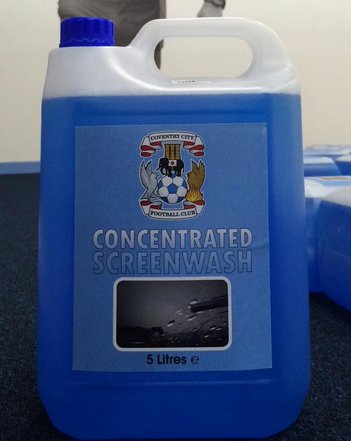