After forcing their way up through the play-offs last year, Siberian side FC Yenisey Krasnoyarsk are gearing up for their first ever season in the Russian top flight.

Speaking of gear, treat yourself to an eyeful of the new home (left) and away (right) kits Yenisey will be wearing for their maiden Russian Premier League adventure… 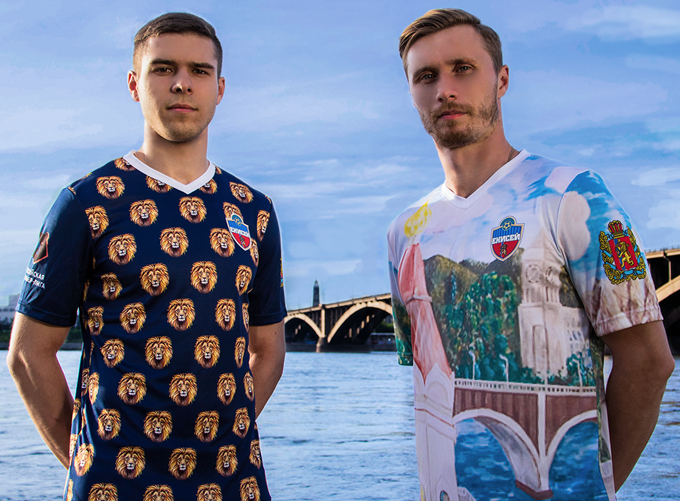 As you can well see, the home shirt features a charming lion motif while the away is entirely dedicated to the city’s architecture, including the cathedral and the railway bridge across the  Yenisei – a UNESCO heritage site, no less.

As per the club’s official website, the two shirts are described thus:

(HOME) Lions are dangerous and single-handed, but when there are many, no force can resist their pressure. A lion never allows himself to be fed up with old successes.

Every day for him – a new challenge, a new pursuit of a dream. We are not going to be content with former victories, and we: the first season in the Premier League awakens new aspirations in us.

(AWAY) We cherish in our hearts the memory of what city we represent. The new form is not only an opportunity to share our pride in Krasnoyarsk with fans and rivals, but also an additional responsibility for everyone who will at least once come out on the field.

One looks like a child’s bedspread and the other looks like a souvenir tea-towel and we’re totally okay with both.

In fact, we’re even tempted to submit a bulk pre-order.