Just as he threatened to do after the World Cup, Antoine Griezmann has gone and commissioned an entire squad’s worth of ‘Superbowl’ rings and bestowed them upon his Atletico Madrid teammates to celebrate winning the UEFA Super Cup.

After going ahead through Diego Costa with less than 50 seconds on the clock, Atleti went on to spank Real Madrid 4-2 in the annual UEFA showpiece in Tallinn last night.

To commemorate his side’s triumph in what is essentially a glorified continental friendly game, Griezmann revealed on Instagram that he’s paid through the nose to purchase one of these gaudy, glitzy trinkets for each of his colleagues… 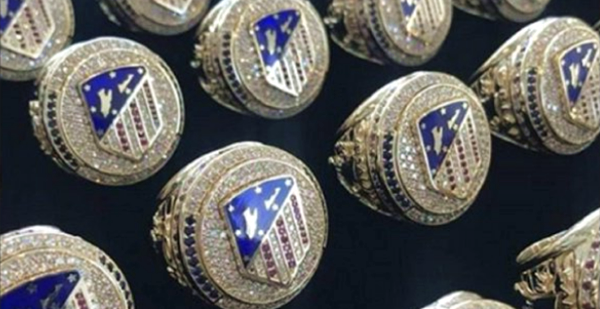 Such rings are commonplace in American sports, with Superbowl, NBA, MLB and NHL champions usually marking their success in tacky bejewelled fashion.

As mentioned, Griezmann asked the French Football Federation if they’d be willing to furnish Les Bleus with similar crystal-encrusted finger trinkets after they emerged victorious at Russia 2018, but it would appear his pleas fell on deaf, or at least disinterested ears.

So, the striker has seemingly taken upon himself to purchase a job lot of expensive tat that has no sporting merit to it at all.

It’s like buying a gilded Faberge egg to celebrate winning… well, something as meaningless as the UEFA Super Cup.