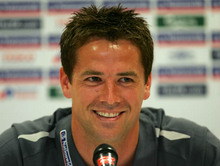 Konami has announced it has secured the services of Michael Owen, who will now appear on the packaging of Pro Evolution Soccer 2008 (I am, although as an Xbox owner I was very, very disappointed with the latest Pro Evo; hopefully the new one will be a lot better).
Owen joins winger Cristiano Ronaldo, who will also appear on the cover.
‘PES 2008 is a fantastic game, and the only choice for pro players,’ said Little Mickey (as he read from a prepared press release in a stilted fashion). He continued: ‘It enjoys a brilliant reputation within many, many players and manages to be a true simulation of football while also being a real laugh to play.’
PES 2008 will be released for PS3, PS2, PSP, Xbox 360, PC and DS this autumn. Can’t wait – please Konami, get it right this timeâ€¦ [Story via Digital Spy]