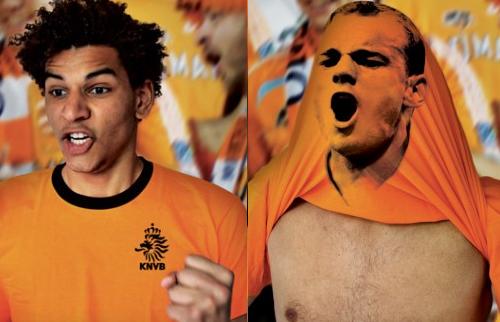 I am officially an idiot.

When I first saw this picture, do you know what my first thought was?

“Why would they put Wayne Rooney‘s face on the inside of a Dutch retro shirt?”

As I say, officially an idiot! On closer inspection, the screaming face in question is fairly obviously that of Holland star Wesley Sneijder.

Anyway, Dutch duo Bas Van der Poel and Daan Van Dam have produced these clever Oranje shirts that, at first glance, appear to be nothing more than your average common-or-garden retro shirt. However, once thrown over your head ‘Ravanelli-style’, the true brilliance of the design is revealed!

You can see more designs (the lack of a Dirk Kuyt option is a glaring oversight) here.