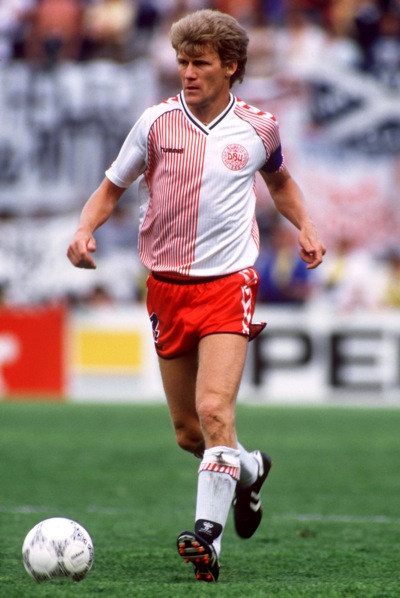 IN amongst the angst I felt re: Bryan Robson’s shoulder and Ray Wilkins’ general shiteness during the early stages of Mexico ’86 was the revelation that was Denmark.

It wasn’t just the results. It wasn’t the performances, as impressive as they were. It was the kit.

Having grown up on a staple diet of Bukta and Admiral, whose kits made Umbro feel fairly cosmopolitan by comparision, no amount of Milano on Midweek Sports Special would prepare me for the impact of those Hummel strips. 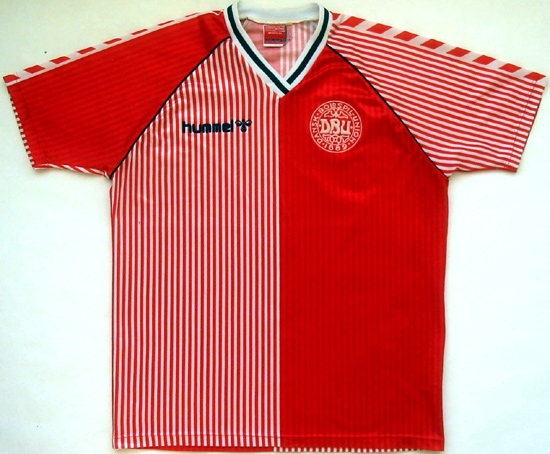 The Denmark home kit in 1986, made by Hummel

This kit was different. A red or white affair with contrasting pinstriped panels and chevrons down the sleeves. But these weren’t just chevrons, or even arrows – they were statements of intent. Like the clear imagery of a Kraftwerk album cover, the chevrons pointed the way forward: attack attack attack. And attack was exactly what the Danes did.

Starting in 1986 in a veritable group of death with a 1-0 victory over Alex Ferguson’s Scotland (Jock Stein had passed away and Sir was in temporary charge), the Danes then went nuts against Uruguay with a 6-1 mauling of the South Americans. Verona’s Preben Elkjaer scored a hat trick, ably assisted by the genius Michael Laudrup.

As the Danes disposed of West Germany (ironically the birthplace of Hummel) 2-0, little me was confident he had seen the World Cup winners. Teutonic efficiency coupled with the grace and flair of Brazil, who were stuttering badly at the time, Denmark looked invincible. Invincible right up to the point when Emilio Butragueno and Spain tore them apart, with ‘El Buitre’ helping himself to four goals in a 5-1 win.

I think that loss actually hurt me more than England’s defeat at the hand of Diego Maradona (although I still attach equal blame to Terry Fenwick and Peter Shilton for that one); such was my admiration for Denmark. In all honesty, it probably laid the cornerstone of my fascination with world football.

I purchased both the red and white Subbuteo versions of Denmark’s kit, and even gazed fondly at the Hummel Tottenham effort that half the kids at my school bought, which would have included Hoddle or Waddle on the back had we done things like that back then… but it wasn’t the same. They just looked like extras from ‘Jossy’s Giants’, but Denmark looked like gods. For a short time, I thought they were.