Pre-1987, Celtic kits had stirred in me feelings similar to that I have about sliced white bread – you know it’s there, but you don’t pay much attention to it.

The problem with the Celtic home kit is the famous hoops themselves. There’s not much you can do with them without causing uproar amongst the hardcore faithful (see 1991-93 and the Peoples sponsored-shirt featuring – the horror! – a red logo for evidence of that) and well, to my eyes they just look untidy. 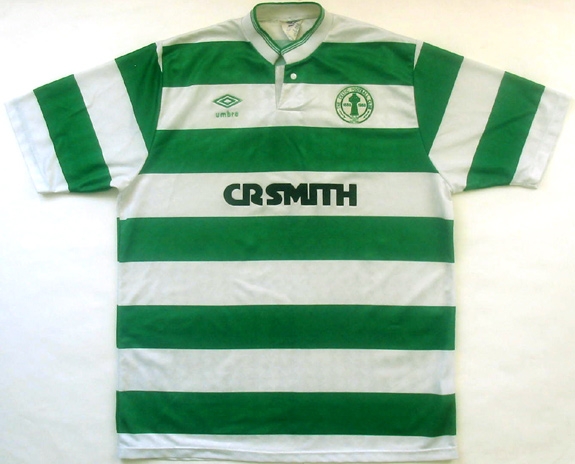 That was until the glorious centenary season of 1987-1988. Rangers had swept to the forefront of Scottish football with their new player/manager/thug Graeme Souness and policy of signing anything English that moved.

Celtic had slumped into second place, and with the 100-year birthday party coming, this wouldn’t do. Billy McNeill returned as manager; money was spent on Joe Miller, Andy Walker, and the one and only Frank McAvennie amongst others. Being a Celtic fan was fun again. 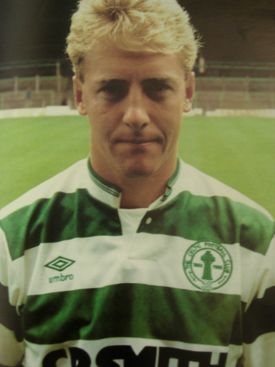 Amidst all the happenings on the field a new badge was commissioned, featuring a Celtic cross instead of the familiar shamrock. It featured prominently on the new kit, which to my eyes, looked amazing. Clean and simple, classic green-and-white hoops with a subtle (for Umbro, anyway) square pattern in the material. The kit looked sharp.

The sponsors name of CR Smith was printed onto a white hoop and actually fitted – a pleasant departure from the previous white-patch-sewn-onto-a-green-hoop approach. For me, it just looked right.

Of course, the team that wore the kit also made the memories sweeter. I can still list the first XI from that season – Bonner, Morris, Rogan, Aitken, McCarthy, Whyte, Miller, McStay, McAvennie, Walker and Burns – as if they were playing tomorrow.

The team had heart and passion and fought for everything. I remember so many last-minute winners in that centenary season, and it’s always the same flash of green-and-white wheeling away in celebration that sticks in my mind.

If you have an all-time favourite kit and would like to contribute to this series, please let us know: ollie@anorak.co.uk