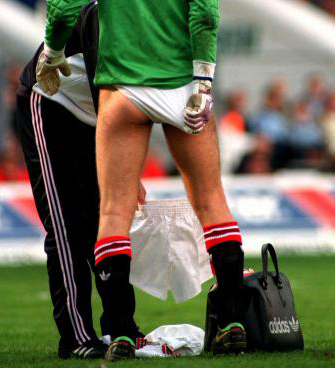 Referee Darren Adie put in a performance which Bath City’s U18s would surely describe as “pants” in an FA Youth Cup clash with Newport County.

The official ordered a number of the Bath players to change their underpants, which were white and visible under their black shorts, thus contravening the law that states shorts and underpants/cycling shorts worn underneath must be the same colour.

After the youngsters were forced to go through the embarrassment of changing in public (with one player having to wear nothing under his football shorts), Adie lost control of the game, sending off five Bath players along with manager Billy Clark.

After the game, Bath’s managing director, Paul Williams, said: “It was all very surreal. I was angry with the officials. Rules are rules but the officiating wasn’t what it should have been for a youth cup tie. Why didn’t the officials check the colours before the start?”

The pedantic ref was also forced to lock himself in his dressing room for half an hour after the game. Understandably.