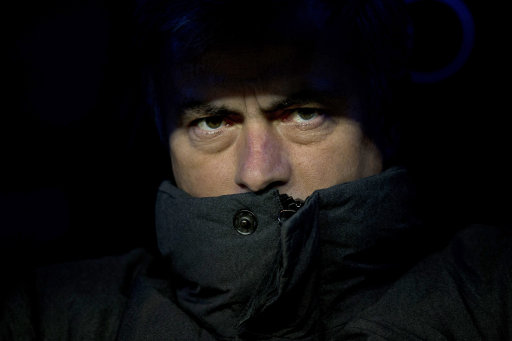 “If you can find me, then you may boo me”

With Real Madrid fans unhappy at the club’s lowly third-place berth in the La Liga table, eight points adrift of Atletico Madrid in second and an 11-point chasm behind Barca at the summit, there have been boos ringing out around the Bernabeu for a good few weeks now.

Indeed, Jose Mourinho was whistled by heckling fans during Madrid’s midweek Copa Del Rey match against third-tier side Alcoyano (they won 3-0 on the night and 7-1 on aggregate) and the Portuguese coach has had it up to *here* with their self-entitled arses – and he’s planning to do something about in his own inimitable style.

“They applaud me, they whistle me, that’s life in football. I’ll go out onto the pitch (before Real’s derby game against Atletico tomorrow) at 9.20pm on my own.

“It’s not a challenge of any kind. If they want to whistle I’ll accept it with humility, and with calm as well because I have been around for many years.”

Clever girl. Instead of the fans disrupting his side throughout the evening in what will be a fairly critical game, Mourinho is going to let the boo-happy chumps get it out of their system by directing their ire at him. He’s the heel, he’s the pantomime villain and he’s more than willing to soak it all up. It’s Mourinho’s stock-in-trade.

He certainly knows what he’s doing, this one.