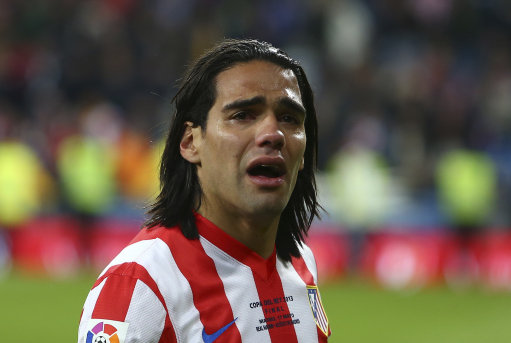 Look at that face. That is the face of a man who knows he’s made a huge ruddy mistake somewhere down the line.

After scoring 80-odd goals in two seasons at Atletico Madrid, it’s fair to say that Radamel Falcao could pretty much have his pick of who to join next – Barca, Real, Milan, Bayern, Forest – yet still he finds himself on the verge of signing a five-year deal at AS Monaco.

Now why is that?

Well, firstly, it’s because Monaco – who are these days owned by Dmitry Rybolovlev, Russian potash magnate and the 79th richest man in the world – will be chucking a fair chunk of a €60 million transfer fee at debt-ridden Atletico (who esteemed football finance blog Swiss Ramble once deemed “one of the worst run clubs in Europe“) in exchange for the Colombian striker, which we imagine helped smooth over the initial negotiations somewhat.

Secondly, it’s because Falcao has somewhere close to zero say in his destiny, thanks solely to the third-party ownership deal he has with The Doyen Group which was hammered out when he moved from River Plate to Porto in 2009. The ownership deal means that Falcao is now essentially owned by his agent, Jorge Mendes, who has purchased a controlling stake in the player and therefore has the right to do with his commodity as he sees fit.

These ownership deals mean that the third-party group make a large investment in the player; buying out his registration and image rights, giving him a better agent, bumping up or even paying his salary outright, hooking him up with top-line sponsors, increasing his exposure, subsidising transfer fees, etc and essentially putting him in the continental shop window (think Tevez and Mascherano at West Ham) in the hope that one day their man will become a star – as Falcao has since making his professional debut at the age of 13 – and they’ll make a tidy wee profit. It’s all incredibly cynical.

In return for this kind of lucrative career supervision, the player simply has to take his hands off the rudder and let his new overlords steer. 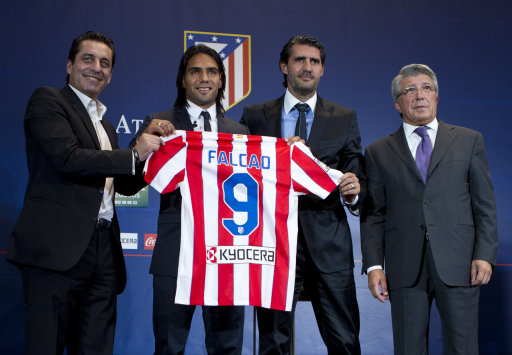 Now, at this point we should be careful that this doesn’t turn into a “poor old Radamel Falcao” heart string tug-a-thon as the forward is definitely not suffering. On top of the money he’s already tucked away so far in his career, he’ll stand to make a further (tax free) £160,000-a-week at Monaco if reports are to be believed so he’s still a vastly wealthy man living in the lap of luxury when all is said and done.

The sad aspect is that a player with his obvious talent, poised on the cusp of becoming an elite global star, is going to be stuck playing on the notoriously mangy turf of Monaco’s Stade Louis II stadium in front of 15,000 Ligue 1 fans every week, rather than fulfilling his potential at one of Europe’s elite clubs.

We don’t wish to demean Monaco’s project – it’s kind of exciting in a “Fantasy Football to the Nth degree” way – or French domestic football in general but, despite what PSG and Les Rouge et Blanc are doing, it’s just not quite as illustrious or accomplished as the top end of La Liga, Serie A, Bundesliga or the Npower Championship.

It just seems a terrible waste is all.

There are reports that Falcao is merely joining Monaco as a stepping stone on his way to Real Madrid as Atletico were unwilling to trade with their city rivals directly (a la Robert Jarni‘s brief sojourn in Coventry) but we’re fairly certain that Monaco’s legal bods would close any loophole allowing that.

And if it does turn out to have been engineered so that Falcao winds up at the Bernabeu in eight month’s time, with Monaco complicit in the whole ordeal, then football’s even more rotten and vile than we thought.

It’s one of those “lose/lose/lose” situations.