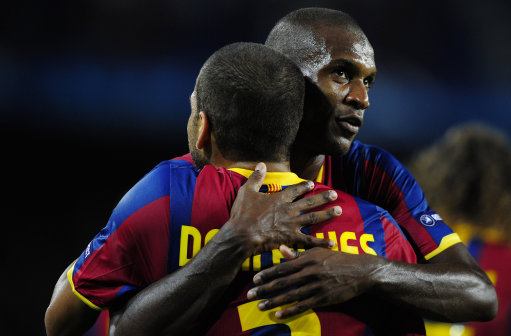 When Eric Abidal left Barcelona for Monaco in the summer, Dani Alves switched from his long-held no.2 shirt number and took up the French defender’s old no.22 squad number as a mark of respect to the man who made a miraculous return to professional football after first being diagnosed with liver cancer and then undergoing a life-saving liver transplant within the space of two years.

However, it would appear that the bond between the former Barca full-back pairing runs a little deeper than that, with Abidal revealing that Alves offered to donate his liver to help save his good friend’s life.

“My relationship with Dani goes much further than him taking my old No.22 shirt. When I had to undergo surgery, he offered to donate his liver.

“Of course, it’s completely out of the question because he is a professional footballer. Our relationship goes much deeper than friendship.”

The cynic in us wonders if Alves’ donating his liver wouldn’t just be solving one problem by creating another, but we shouldn’t scoff at the heroic, selfless gesture.

Make no mistake, Dani Alves has just gone up ten-fold in our estimation.