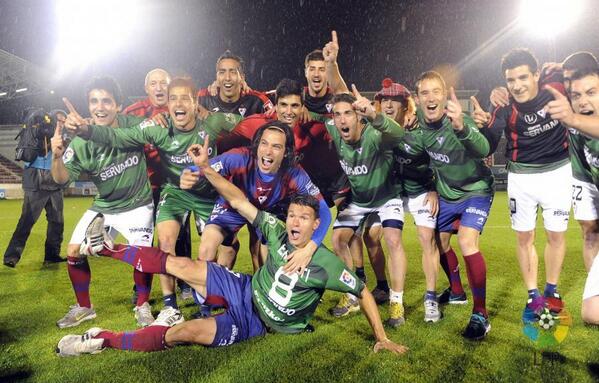 Relative minnows SD Eibar are currently in the process of saving up to fund a concerted crack at Spain’s top flight next season after winning the Segunda Division by a single point.

Following two remarkable successive promotions from the lower reaches of Spanish football, Eibar are currently too small to technically be allowed to play in La Liga next season as the league requires all Primera Division sides to have a minimum capital of €2 million.

Eibar’s currently stands at €400,00 though they are planning a fund-raising campaign and shares sale to rectify the situation.

Indeed, in an effort to reserve funds for little luxuries like improved player wages and new signings, Eibar decided not to shell out on fancy, brand new confetti to hurl about at their promotion party and instead opted to buy second-hand.

Realising that Barcelona had bought lots of red/blue confetti in preparation for winning the Liga title on the last weekend of the season before losing out to Atletico Madrid, Eibar contacted the Catalan giants and struck a deal to buy all of their unwanted confetti.

Barca were unable to keep hold of the confetti for future use as, as anyone with a working knowledge of confetti already knows, it tends to clump together if stored for too long. Confetti must be fresh.

According to ABC.es, Eibar will now use Barca’s cast-off confetti at their promotion party on Saturday.